The Howls of Owls

With the last light fading, Malcolm lumbered up the incline.  Theobald, clinging to his back, had hoped to have gone to the pond.  He was in need of floating.  He was tired of bouncing; it wasn’t natural.  He was also fed up with having to put up with other animals.  he found irritating, especially in mobs.  He wanted to be alone, to float down to the bottom of a body of clear, fresh water, leaving all this noise and chaos behind; but here he was, back on Malcolm, bouncing along to a place where (no doubt) they would find other packs of deluded animals behaving, well, embarassingly.  He tried to remember if he had ever met a normal animal, or lived any other life, but it seemed so long ago.  He could not… what was that?  “Did you hear that?”

“I didn’t hear anything.”

“I didn’t either,” said Miranda.

Theobald sighed.  More strangeness to deal with.  “There it is again.”

“There it is again.”

Theobald felt his blood curdle.  “That is definitely an animal in pain, maybe more than one.  I don’t like it.”

“What if it is wolves?”  Theobald had hoped to have seen the last of the lupis gang.  He had, however, already felt Malcolm shift direction and soon they were swiftly climbing, and bouncing, to the top of the ridge.  Reaching it, Malcolm stopped under a pine tree.  “What can you see?”

Theobald looked down the other side of the hill.  In the twilight, shadowed pines fell away into forest across the valley, rising on the hill beyond.  The screams were louder now and more persistent, but Theobald couldn’t place them.  “I don’t see anything except trees and hills.  Where do you think they’re coming from?”

“From above,” said Miranda.  “It’s echoing in the valley.”  Theobald strained his neck to look up, but all he could see were pine branches.  “Who is it?”

“They heard you,” said Manley.

They waited.  After a few breaths, the crying began again.

Miranda screeched again, louder this time, it seemed to Theobald.

Again the crying stopped.  The forest was silent.  Then the sound of wings fluttering.  Theobald looked up as a flock of Owls descended to the branches of the tree above them.

The Owls, having perched on the branches now silently regarded them.  Finally, a large Horned Owl, peering at them with wide eyes, spoke.  “What do you think you’re doing?”

“We thought someone was in trouble… we heard a cry of pain.”

“Are you,” said the Owl to Miranda, “referring to our singing?”

“We like to sing alone.  We don’t like it when other animals join in when they haven’t been invited.”

“What’re you singing about?”

“The stupidity of animals.”

“Except owls,” added a tall owl whose orbed gaze resembled a full moon.

“Do you,” asked Malcolm, “think the singing helps?”

The tall owl regarded Malcolm for a breath.  “Not particularly.”

“To stop us crying.  You should try it sometime.  It might make you feel better.”

Malcolm suddenly raised his head and began to shriek although his voice was rather low-pitched.  He stopped and looked at the owl.  “You’re right, I do feel better.”

The owls began screeching again and Malcolm tentatively joined in.  Theobald couldn’t believe his ears.  Malcolm’s voice was just as discordent except deeper, and didn’t sound any better than the owls.  Theobald felt he might scream with all this noise.  He tried pulling back into his shell but that was useless, the screeching seemed to enter his body, as if someone were driving a stick inside his pectum.  Rocking back and forth, he lost his balance, tumbled off Malcolm and bounced down the hillside, through brush and rock, abruptly stopping with a jolt.  Lying on his side, still, Theobald let out his breath.  He wasn’t hurt.  The noise had stopped.  He moved his legs, to ensure that they still moved, and touched something large and warm.  A body.  The scent was unmistakeable.  Darius.   He heard the others coming through the brush towards him.  No one said anything.  He poked his head out and looked around, noticing the others staring at the animal.  “What is it?”

Suddenly, the Owls flew down and perched on a branch of dead tree close by, and began screeching again.

“Must you do that?” Theobald shouted.

The Owls stopped, glaring at him.  “He was our friend.  He was killed by stupid wolves.  That’s why we’re singing.  We’re saying goodbye.”

“How do you know?” asked Malcolm.

“We know when we say goodbye.”

“It’s important you remember exactly how many.”

“Why?  He’s dead.  How many wolves killed him isn’t important now.”

“When you explain to the animals that the wolves killed Darius, they’ll want to know how many and if you can’t tell them, they might not believe you.”

“We’re not saying anything.”

“We don’t want them to know we saw them.”

Theobald peered at the owls.  Suddenly, they seemed vulnerable.

“Why not?” Malcolm asked.

“It would make them angry at us.”

“If the wolves were angry at us, we wouldn’t be able to eat.”

“They’ll wait and watch us, and when we find prey they’ll scare them off.”

“They’ve done it before.”

No one spoke.  Then Theobald was surprised to hear Malcolm say, “I will protect you.”

“I will protect you.”

“I’ve come from the Yaglimth.”

All the owls gawked at him, as the head owl said angrily, “do not take the Yaglimth’s name in vain.”

“I am from the Yaglimth.” stated Malcolm, staring down the owls.  “The wolves will not interfere with you.”

Had Malcolm lost his reasoning?  Staring up at him, Theobald noted a grim determination in his eyes.  He also noted Miranda watching him curiously.

“Go, hunt your food and take the fear from your hearts.  The Yaglimth shall protect you.”

The owls hesitated and then, led by the head owl, flew off into the night.

As Malcolm squinted after them, Theobald saw that the moose’s expression had changed.  It was calm, and determined.

“At first light, we’ll return to the dell.  We have much to do.”

Miranda had said nothing.  What was to be said?  Or asked?  Some change had come over Malcolm, something in his mind had hurdled doubt and fear.  Whatever it was, Malcolm was unlike Malcolm.

He had led them back up to the ridge where they had waited in the dark while Malcolm, standing alone beside the Rock, seemed to fix his thoughts.  At the first glimpse of light on the horizon, he led them down into the dell.  Then, as early grey light began to filter through the the aspen, the balsam and birch, he raised his voice and said, “All gather.”

At first, no one appeared.

Malcolm waited patiently then repeated, “all gather,” staring out silently at the pond.

Watching, Miranda saw animals begin to drift into the dell, stop and gaze up at Malcolm.  He seemed to radiate certainty.  What was it that had changed?

“Animals of Grattie Brina and Lupis Park,” he said.  “I have come from the Yaglimth to help you and Bender find a lasting peace.”

The animals regarded him carefully, but without fear.

“We will need to banish fear from the Dell.  How shall we do this?”

“What does the Yaglimth say?” asked a hesitant voice.

“The Yaglimth says that you must find the answer for yourselves.”

No one spoke.  “Can you give us a hint?” asked a timid voice.

“How could there could be a threat if you all stood together as one.”

“What do you mean ‘together’?”

“You mean ‘together’ all the time?”

“You mean, we’d have to be… together, standing… and er… eating, sleeping, walking, and foraging… together?”

Miranda heard a voice state emphatically, “I’m not standing next to him.”

“Is there,” asked Malcolm, silencing the gathering, “another way?”

A small voice in near the bushes asked, “Would we have to go poo together?”

The animals murmurred to each other.

“How long would we have to…ah. stand together?”

“You would decide that, but imagine if an animal were about to attack you, all of you banding together, all reaching out to smack this animal.  What would that animal do?”

“Bite our paws off?” said the small voice.

She could hear a few voices conversing at the bottom of the Dell then, like a stream torrent, chatter rushed through the cluster towards them—foxes, badgers, field mice, frogs, skunks, squirrels, raccoons, voles, woodchuks —all arguing and filling the Dell with a din, with crows, ravens and blackbirds interjecting from the trees above.

Abruptly, the voices died out, the animals edged back and in the centre of the dell Miranda saw Bender, peering at everyone with a perplexed expression.

“Animals of the Forest,” said Malcolm, “here is your leader, the one who will guide you on behalf of the Yaglimth.”

“What of you?” asked the timid voice again.

“I will be returning to the Yaglimth.”

A moan of disappointment covered the animals.

“Do you question the wisdom of the Yaglimth?” asked Malcolm, quietly.

“No, no.” replied the timid voice.

“What,” asked Bender of the crowd, “have you decided?”

“We have decided,” said the timid voice after a pause, “to stand together, always.”

“In what cause?” asked Bender.

“What cause?” asked the timid voice.

Miranda thought she saw Bender smile but it was fleeting.  Bender looked up to Malcolm and asked, “what does Yaglimth suggest we do first?”

“The Yaglimth suggests,” said Malcolm, “marking out the territory which is at peace, and then extending it, a bit at a time.”

“Each animal,” said Bender, looking about, “is to go into the underbrush surrounding us and bring back another animal.  Once we have enough animals, we will command the Dell from the Rock to the pond and from the grove to the ravine.”

“What about the boars and the wolves?”

Bender didn’t smile.  “I’m sure they will want to join us once they see what we’ve accomplished.  Go now.”

The animals hestitated then disappeared excitedly into the undergrowth.

“When do you,” Bender asked Malcolm, grimly, “return to the Yaglimth?”

“Not until there is peace.”

Bender was staring up at Malcolm.  It seemed to Miranda that he was as puzzled as she.

“While Healey has been writing for TV and film for decades, The Sex Life of the Amoeba is impressively cohesive for a first novel, keeping the reader engaged and entertained in equal measure.

Anyone looking for a fun read and an intelligent but loving skewering of the Canadian film industry would do well to pick up a copy.”

The Ballad of Sexy Gulch 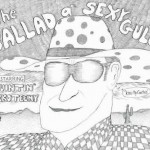 A short film by Barry Healey